Stockholm and its neighborhoods

As I mentioned in an earlier post, Stockholm is made up of lots of isles. The major ones I will describe here for you. In almost every city you have neighborhoods associated with a set of attributes and people who live there tend to keep to a certain lifestyle. We’ve made it easy for tourists in Stockholm!  We’ve actually grouped all the people with similar lifestyles together on separate islands. That way, you always find it easy to blend in (as long as yo keep reading this guide!). I’ll post more in-depth information on the different neighborhoods/islands in the near future!
Södermalm
This is one of the biggest islands in Stockholm. It is also a perfect example of “run down working class neighborhood comes trendy”. If you’re in Stockholm to hang out with bohemians, artists and creatives you need not leave this island. If you feel you're a struggling artist, misunderstood poet or a little bit creative in general this is probably where you want to hang out. 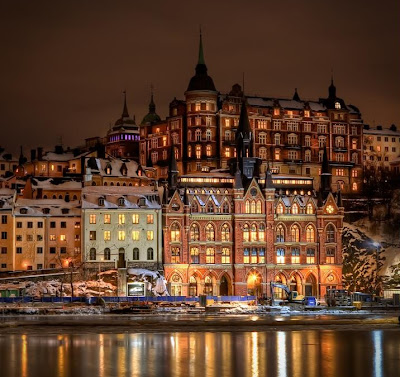 The pubs and bars in Södermalm range from extremely shady to outrageously chic. Point is, there are loads of them. There’s no island in Stockholm with as many bars and pubs. 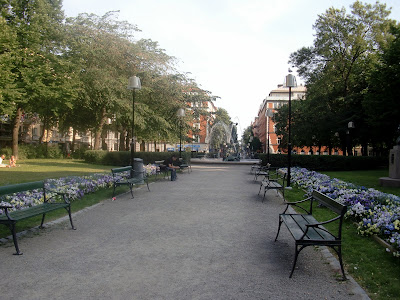 Mariatorget
The area around the square Mariatorget is one of the nicest neighborhoods in Stockholm, with trendy cafes and hipsters everywhere you turn. On the opposite side of Södermalm is Nytorget. This neighborhood is also, quite ridiculously, called Sofo (South of Folkungagatan). If you actually call this area Sofo in a conversation with someone who is trendy (or think they are trendy) they will probably perceive you as extremely untrendy. 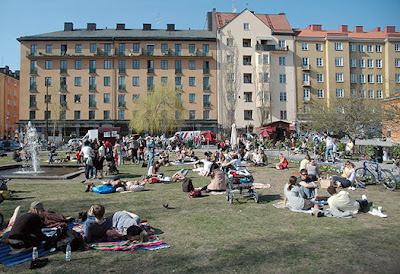 Nytorget
I'd recommend you to stay away from Medborgarplatsen, which is the main square situated in central Södermalm, and chances are you will find your way to some really authentic and cozy neighborhoods, with trendy bars, cafes and small boutiques.
Major tube-stations: Mariatorget (red line), Medborgarplatsen (green line), Slussen (green and red line)

Östermalm
Östermalm is the complete opposite to Södermalm. This is where the rich and the wanna-be-rich people live. You will find a decadent display of Range Rovers, designer prams, bling-bling and implants. To be fair though, Östermalm also has the most impressive architecture, the most exclusive restaurants, cafes, shops and probably the most beautiful people (with the aid of the scalpel or no). 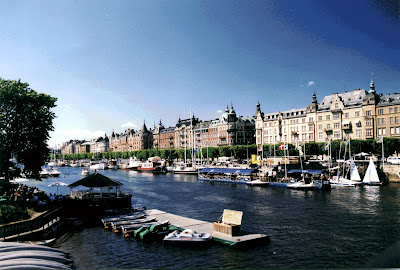 Strandvägen, Östermalm, as seen from Djurgården.
There’s a large cluster of nightclubs around the square Stureplan. Everyone who’s drunk in Stockholm ends up here sooner or later, because it’s one of the only few areas where the clubs are allowed to be open past three A.M (03.00). Östermalmstorg is a nice square with lots of posh cafes and restaurants. Here you will also find the posh and upclass market Östermalmshallen, where all the rich old ladies buys their foie gras. 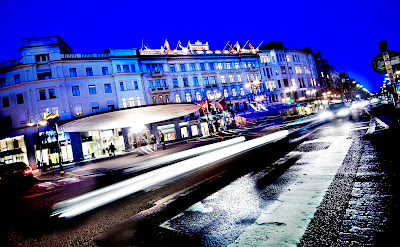 Stureplan
Strandvägen is one of the most popular and beautiful promenades in Stockholm. It runs from the Royal Theater to Djurgården (large park). If you have a few hours to kill before dinner, this is a really nice walk.

Needless to say, people from Södermalm and Östermalm usually chose not to mix. Old Town is like a buffer zone between these two neighborhoods as they glare at each other across the water. Japes aside, the two isles represent two very different sides to Stockholm and they are both worth a visit.

Major tube-stations: Östermalmstorg (red line), Karlaplan (red line)
Vasastan
So you have the bohemian Södermalm and yuppie Östermalm. If you remove the most avant-garde of the Bohemians of Södermalm and the blingiest of the Snobs of Östermalm, you have Vasastan. Beautiful architecture, but nothing too grand, nice restaurants, but nothing too exclusive. Trendy, yes. Provocative, no. Swedes are usually a pretty modest people, maybe that's why the somewhat mediocre Vasastan has become one of the most popular places to live in Stockholm, property value has sky rocketed the last decade and is now almost level with the Östermalm. One of the nicest areas in Vasastan is around a square called Odenplan. The area is packed with cafes and restaurant and it’s totally void of tourists as there are no major landmarks around. Vasastan is characterized by several large boulevards that run through it; Sveavägen, Odengatan, Karlbergsvägen and St. Eriksgatan. 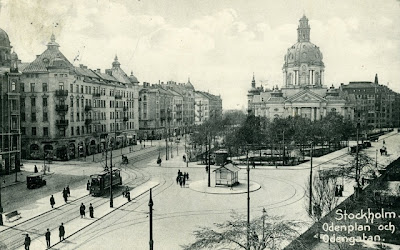 Odenplan, Vasastan. No they don't dress like that anymore.
City a.k.a Norrmalm
This is where the Central Station and the main shopping streets are situated. It’s probably the least charming part of Stockholm. Only go here if you are in dire need of H&M clothes or tourist trinkets. There are a few nice spots though, like Kungsträdgården with its cherry trees in spring, the Opera House, the Parliament and the and fashionable apartment store NK. Raul Wallenberg’s Square is a nice spot for ice cream and boat spotting on a hot summer’s day. Mostly though it’s pretty overcrowded and overrated, and it’s a shame so many tourists end up here. It's also the place in Stockholm where you are most likely to be pick-pocketed (although these sorts of crimes are pretty unusual in Stockholm and strike only the most careless of tourists).
Major tube-stations: T-Centralen (red, green, blue line), Hötorget (green line), Kungsträdgården (blue line) 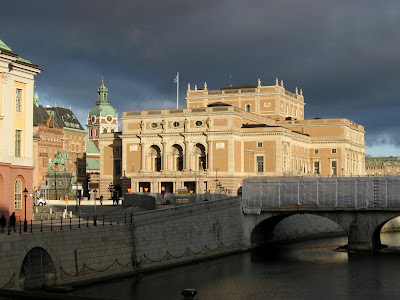 Royal Opera House, Stockholm.
Gamla Stan (Old Town)
Gamla Stan is one of the smallest islands in Stockholm. This is where all the cruise ship guests end up for a few hours of intense sightseeing. Old Town is overrun by pubs, shabby restaurants and souvenir hawkers. But if you tread off the two major tourist streets you will actually find a very tranquil and peaceful part of Stockholm. Antique shops, cozy restaurants and boutiques are scattered about the alleys of Old Town. Just three or four decades ago Old Town used to be really run down and shabby, but with the influx of tourists in Stockholm this part of the city has gone through a tremendous face lift. There are loads of famous landmarks here, The Royal Castle, etc., so if you want some nice pics to show friends and family when you get back home, it’s definitely worth a visit. 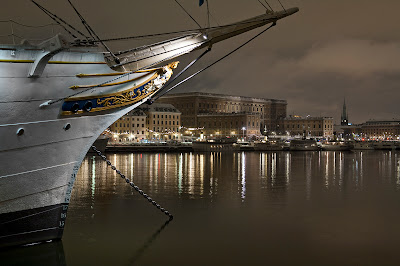 The Royal Castle as seen from Skeppsholmen.
Riddarholmen is a tiny island just off Old Town and it is home to several of the oldest buildings in Stockholm, most notably Riddarkyrkan, where many of Sweden's old monarchs lay buried. Other than that it's pretty barren from points of interest.
Major tube-stations: Gamla Stan (red, green line)

Kungsholmen
I have to be honest with you, Kungsholmen is not a part of town I frequent a lot. It used to be known under the not so flattering name “Retirement Isle” a couple of decades back due to the many senior citizens living here. The Florida of Stockholm if you like. Now-a-days much has changed (old people does not stay old forever you know) and Kungsholmen is much more trendy and youthful. The park Rålambshovsparken is probably the largest outdoor drinking hangout for youths. Bring a six pack and feel right at home. 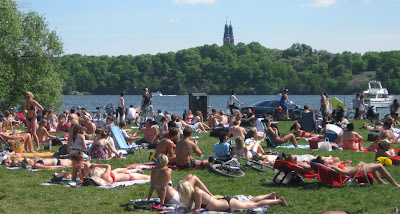 The majestic Norr Mälarstrand is a long boulevard that runs along the southern shore of Kungsholmen and there are a lot of nice outdoor restaurant and bars along this shoreline, most notably Mälarpaviljongen (gay friendly) and Restaurang Kungsholmen (up class). City Hall is situated at the beginning of Norr Mälarstrand, and it’s worth a visit (this is where they hold the Nobel Prize dinner). 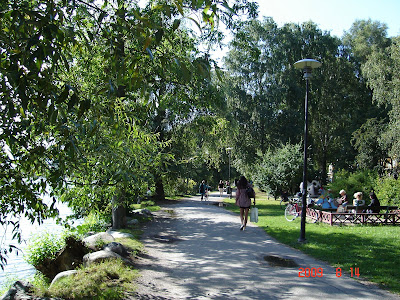 The promenade along Norr Mälastrand.
Major tube-stations: Fridhemsplan (green, blue line), Rådhuset (blue line)
Birkastan
This is actually part of Vasastan, but for some reason it is considered to be an independent enclave. Birkastan is an old working class area with loads of cafes and restaurant. Sometimes it’s called “Little Paris” because of all the cafes, but that’s just something I reckon some realtor made up to increase market values. It's small, it's cosy, you'll love it.

Other isles, big and small
Djurgården is a large island close to Östermalm. It’s like a huge park, but there are also a few residential areas and some extremely exclusive villas out here. It’s also where you will find the Gröna Lund amusement park and the zoo Skansen. There's a huge outdoor bar/night club in Djurgården called Josefinas. It is not super trendy, but it's a nice place to go for a few drinks because of the view. There are also loads of museums out here, most notably the Vasa Museum. You get to Djurgården by tram from Sergelstorg or Norrmalmstorg.

Blasieholmen, Skeppsholmen and Kastellholmen is a series of small isles. Blasieholmen is where Grand Hotel is situated so it’s pretty easy to find and very central. Most boats to the archipelago leaves from here. Blasieholmen and Kastellholmen are both very pretty with lots of museums, nice restaurants and walks along the waterfront that promises good photo ops.
Långholmen is an isle off Södermalm, this is a perfect spot for a swim in lake Mälaren on hot summer days.
Posted by Shoeman at 9:00 AM